I was browsing my twitter feed when a pop up appears from one of #iKON Fansite, it says “iKON in Manila.” I panicked and messaged my friends of the news. I really don’t know what it was for, until a few days later Samsung Philippines posted a raffle event on their website.

I felt really sad as I read the mechanics because I knew I had zero chance to attend this event — I am not a Samsung user, I can’t stay up late to watch the video promo and I have no luck on raffles. But then… as a fan… I am desperate to see them. I messaged the people I knew whose using Samsung and asked them if they can register me. Apparently, their mobile units weren’t qualified to join. It was really stressful.

I was also tempted to sign up for Tinder just to search for a Samsung user. I sound creepy right? Don’t worry, I didn’t do it! Haha

I lost hope… I let it go… Even though deep inside I am still frustrated. I tried to talk to myself “Bars were not your thing — Night Out. Smoke. Liquors. and High Class event!” You know, just to revert my thoughts into a positive one.

A week before the event, I got a message from our Editor-in-Chief that we can cover the #SamsungGalaxyS10 Launch and I volunteered to go! That was my chance and so I grabbed it! I almost cried out for joy. I’m gonna see iKON again. Hurray!

We arrived at the venue earlier than expected so we just roam around the place after we register at the media booth! It was actually my first time to visit Cove Manila in Okada Manila and I could say it’s really made for high end clients. Like the inside of the whole Okada Manila was really “sosyal”. The retail store, the restaurants, and the clubs were all made for rich people. I couldn’t afford it. Haha

Like any other events, we were stamped on the wrist at the entrance. I actually expected the normal stamp, you know the one with violet ink but I was surprised that there’s no visible ink at all on my wrist. It’s like a secret stamp? Because when the staff lit a flashlight on my wrist, the white stamp appeared. It was so cool and “exclusive”! Amazing! Haha (*pagpasensyahan niyo na first timer.lol)

Yieee!!! It was a “This is it” moment when the staff said “Okay, Go Inside”! Haha I really felt so enthusiastic that I ran inside to get the best spot. I told myself “I have to be in front” and I did! #proudmoment (taps my shoulder twice for a job well done).

The program started with an artistic dance show and was followed by a talk from James Jung, Samsung Philippines President, Benson Galguerra, Product Marketing Head for IT & Mobile, and Lea Cua-Lopez, Product Marketing Manager for Flagship Smartphones – S Series. The Samsung S-series showcases the next generation mobile experience. Each of its feature captures everyone’s’ lifestyle choices – from adventure, health, to photography. It also comes in different colors too – Prism White, Prism Black, Prism Green, and Prism Blue.

The whole talk has been interesting. The features of Samsung Galaxy S-10 really captivates me, especially the camera focus function. 🙂 I actually listen to them as I secretly go near the stage. I have to or else I won’t be able to write anything on our bit/assignment.

My co-writers and I were the only ones in Indian seat in front of Samsung officers. We had to get the best view for our articles ! I even told Gelo, “you have to prepare the videos, and photos, because once iKON walked up on stage, I know, I’m gonna lose it.” I’m so lucky that he’s so supportive of me.

When the LED on the center opens, I saw Junhoe first and my eyes went in slow motion as I look at other members. I was so stunned. I never imagined, I would see them up close. I’m usually at the GenAd / Upper Box section on concerts and this was my first time being this close to them. It feels so surreal. They were so good looking and what they were on camera was what they look like in real life. AAHHH!!!!

From my view, I can see them got shocked when they saw that the stage was small but Donghyuk from our side guide them to position themselves alongside Jinhwan and B.I as they start the first song “Love Scenario“.

From this point, I would like to apologize to your ears and to all the media beside me who had a hard time editing my voice from their video. (I literally watched all the fancams from those media outlets – and my voice was really standing out. Like as if I am one of the members.). I couldn’t help it. They placed all the #iKONICs at the back (which was far from the stage) and I have to represent them in any way I could. Given that I am the one in front where #iKON can see. I gave it all! I gave my best shot! This was a once in a lifetime moment. So, “itodo na natin to, guys! lol” **sample video from one media there…She’s the one beside me**

There was a mini interview after the “Love Scenario” performance. It’s also where DK, Yoyo, Jinhwan, and Junhoe finally noticed me. I called them and say hi to them. They said hello back. *Ayiee… Kilig me!* But, I only had a video of me with Yoyo saying hi back (see below).

After the interview, they proceeded with their two performances – “Killing Me” and “Bling, Bling!”

Behind all those cameras, you can see me on the side at 1:20 partying on iKON’s song. I bet you can easily identify me. lol! Also, Hanbin looked at me like as if telling me “Kanina pa tong babaeng to! Ayaw paawat eh!”

OMG!!! OMG!!! Chanwoo shook my hand at the start of Bling Bling. (If you have a clear video of that… please send it to me). His hand was soft and really smells good. I couldn’t even dare wash my hands after. Unfortunately, I was being pushed by those people halfway through the song that I almost fall on stage speakers so I moved back. I already got a glimpse of them and interacted with them, I’m already satisfied with that. 🙂

When iKON performance ended, it’s as if a major dispersal happened. All the media just vanished from the front and went home. I don’t even notice how it ended. After I moved from Bling Bling performance, I went to my colleagues’ seat and share our fangirling moments with each other.

We stayed for a while, took our time to rest and drank the free tequila and juices from the bar before we had our pictures taken at the Samsung photo wall, and the light effects for remembrance. 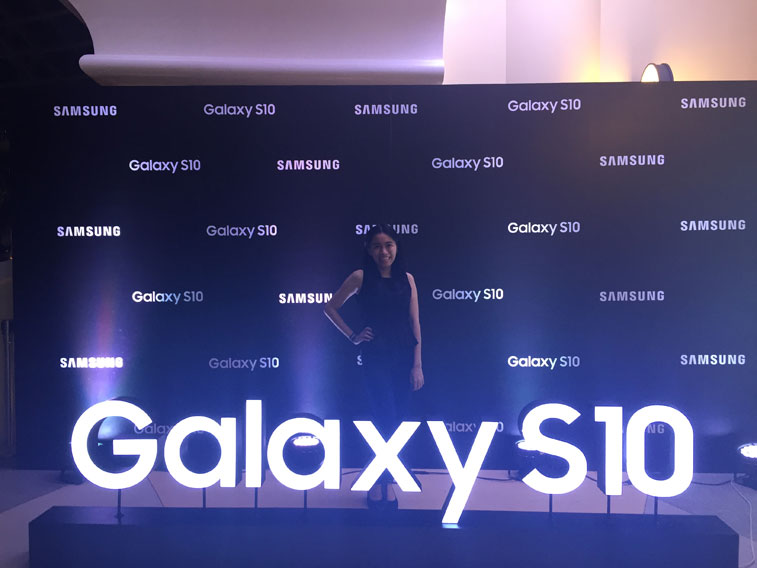 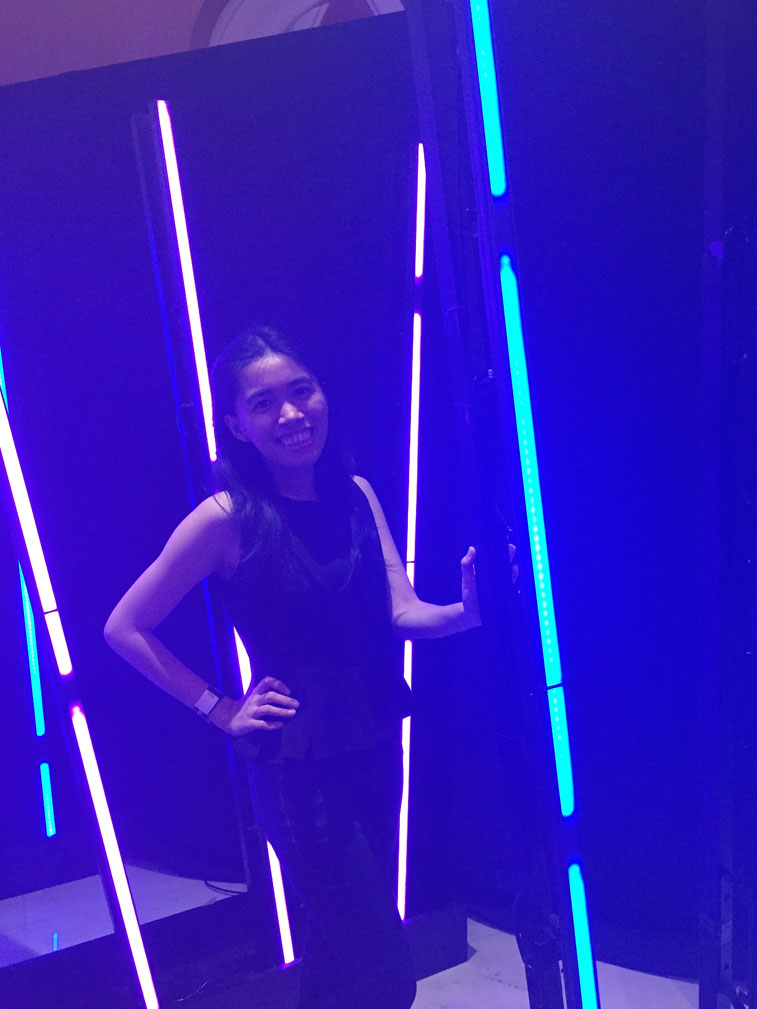 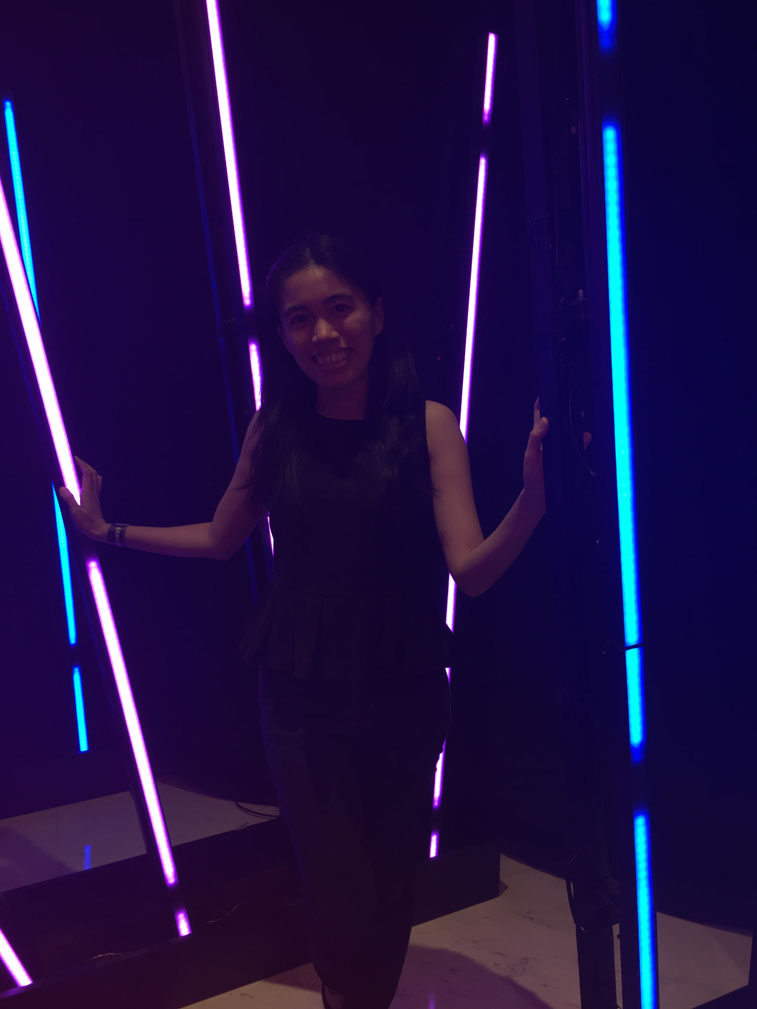 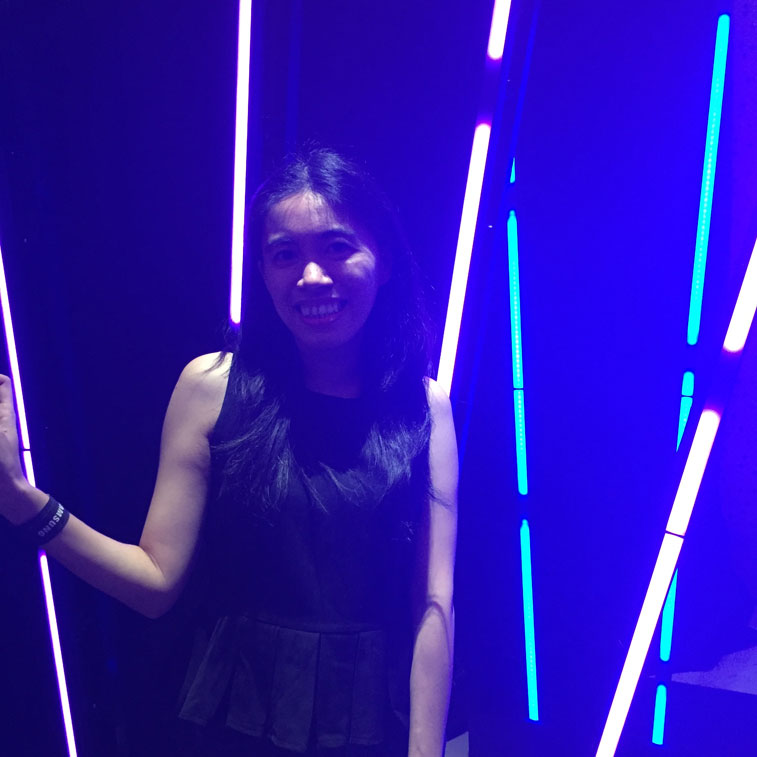 We had a JBL speaker gift from Samsung after the event. It was so much fun, despite all the issues that have arise on this event. Thank you Samsung and my MCJ Family! 🙂